Learn how to cook a tender and juicy turkey breast in the slow cooker. Flavoured with sage and lemon and served with a delicious homemade white wine gravy. This is the perfect way to make turkey for a small gathering that saves space in your oven for stuffing or Brussels sprouts.

Thanksgiving is my favourite holiday because it’s all about the food! And whether it’s your first time or fifteenth time hosting, the most important thing you can do is to start planning your menu, step one is always to lock down your holiday recipes.

While you’re planning your menu, you’ll inevitably run into the challenge of oven space. Enter the crockpot and your new go-to turkey recipe. If you don’t have a slow cooker, you could also make a turkey breast in the air fryer.

Now I’ll be upfront, if you’re having a large group over, you’ll likely still want to roast a whole bird, but if you’ve got a small crew coming, doing a breast in the slow cooker might be the best decision you make.

There are a few simple techniques that take this turkey breast to the next level. A slow cooker is generally more of a moist-cooking vessel and with this recipe, as the turkey cooks it will let off steam.

The steam is essentially locked inside the pot, making this an almost a self-basting turkey which means that it will be extra juicy.

What to serve this with

There are a few classic side dishes to serve at Thanksgiving, Brussels sprouts with bacon, small batch stuffing recipe perfect for a small crowd and a Thanksgiving chopped salad make for a pretty well rounded dinner.

I always like to add something that’s a bit of surprise, so these mashed sweet potatoes with buttermilk and blue cheese are a fun twist on a classic side.

If you do end up with any turkey leftovers, I love to make turkey pot pie with puff pastry, or a leftover turkey and rice soup. 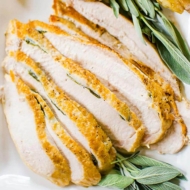 To make a simple gravy: