Quiche Florentine is a simple, classic French dish, made with eggs, cream, fresh spinach, and cheese baked in a flakey pie crust. It’s easy to make and perfect for a light dinner, lunch or brunch.

Homemade quiche is a favourite in our house–it makes great lunches or is an easy make-ahead dish if you’re hosting brunch. You can absolutely make your own pie crust, as I do in my broccoli cheddar quiche recipe, but sometimes a shortcut of store-bought pastry is the way to go (especially if we’re talking weeknight dinners!).

This recipe comes together quickly (I pretty much always double it!) and bakes into a custardy quiche with just the right amount of spinach and sharp cheese (in case you aren’t sure, quiche Florentine = spinach quiche). It’s the perfect light meal to serve alongside a crisp, fresh salad.

The trick is to precook the spinach and squeeze out as much liquid as you can so you don’t end up with a soggy crust or watery filling.

Does this freeze well?

Quiche is a dish that freezes very well. The trick is to prepare the quiche as per the recipe below and allow it to cool completely. Wrap it well in aluminum foil and freeze. It should be ok for about three months in the freezer.

How do you cook from frozen?

What is the best cheese to use in quiche Florentine?

I’ve had success with old cheddar, Gruyere cheese and Swiss cheese. You could use a combination of all of them or on their own.

What’s the difference between quiche Lorraine?

Quiche Lorraine has a filling that is made with bacon or lardons whereas quiche Florentine is vegetarian and made with spinach.

What to serve this with 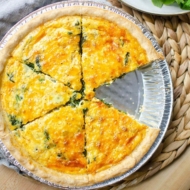