You’ll love this juicy Dutch oven whole chicken roasted with potatoes and fresh herbs. This is an easy one pot meal flavoured with lemon, garlic, and oregano. Plus you’ll love the Greek-inspired lemon potatoes!

There is something that I just love about a roast chicken; it feels like a warm hug and makes your kitchen smell heavenly. Imagine pulling this out of the oven on a Sunday afternoon? Trust me, it just works. I also love to make lemon thyme roast chicken, which has similar vibes to this recipe.

The other best part of this recipe are the Greek inspired potatoes. They are cooked in lemon juice and the fat that comes off the chicken–hello flavour! It may seem like a lot of garlic and lemon, but that’s the secret to Greek cooking.

What size Dutch oven should you use for a whole chicken?

Should this chicken cook covered or uncovered?

For this recipe, both! You’ll need to roast in covered for the first 40 minutes and 40 minutes uncovered for crispy, browned skin.

What to serve with this 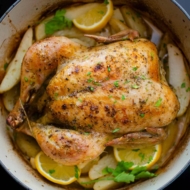