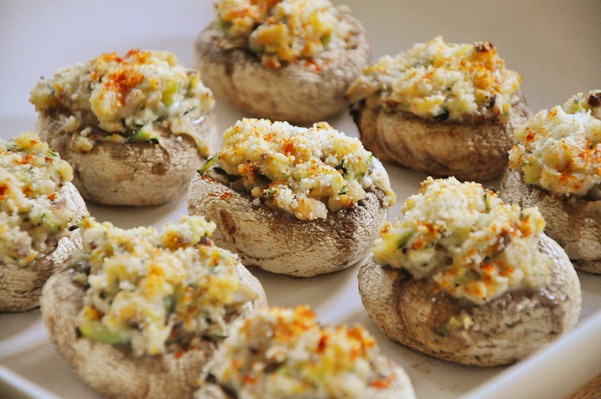 Way back in the early days of Living Lou, I posted a recipe for stuffed mushrooms. While both of these recipes have the same base of shrimp, they yield pretty different results. The first recipe is a lot richer than this lighter version I’m sharing today, so I’ll leave it to you readers, which do you prefer?

Wash and grate zucchini, allowing zucchini to drain for 5-10 minutes. Meanwhile, wash and remove stems from mushrooms, set aside caps and 5 stems. Roughly chop the stems.

Using a teaspoon, scoop the mixture into each mushroom cap, filling just passed the top. Sprinkle with Parmesan, black pepper and paprika (if using). Repeat for remaining caps.

Place the mushroom caps on a lightly grease baking sheet, and bake in the oven for 15-20 minutes. Serve immediately.

So, are you among the people who call stuffed mushrooms one of their favourites? Or are you like me, and not a fan, but continue to make them often for the ones you love?