Pressure cooker chicken stew is the perfect comfort food with bacon, potatoes, carrots and peas for flavour. This traditional chicken stew comes together instantly in a pressure cooker. This post is sponsored by Hamilton Beach.

Is there anything better than a stew in the winter? Well how about a stew that doesn’t take hours on the stove or in the slow cooker? Enter the pressure cooker.

It took me a while to get on the pressure cooker train, but I am on board! A melt in your mouth chicken stew with potatoes, carrots and peas that comes together in under an hour is a true, weeknight winter treat. What more do you need?

The truth is, I found the pressure cooker to be a little scary, I didn’t love the idea of turning a valve to then have a ton of hot steam pouring out. That’s why I am in love with the Hamilton Beach Multi-function Pressure Cooker—it has a unique steam release button, that keeps your hands safely away from the valve when releasing pressure.

They key to making a good stew, of any kind, is to brown the meat first. Don’t skip this step! It adds a ton of flavour and I actually find this really easy in the pressure cooker, because you can use the “brown/sauté function” to brown the meat right in the same pot.

When I started working on this recipe, I found that there weren’t as many pressure cooker chicken recipes as I thought there would be. Chicken breast can easily overcook in the pressure cooker, but in a stew, it ends up falling apart and it’s perfect.

When making stew in the pressure cooker, always thicken at the end.

The key to making a stew in the pressure cooker is to add the thickeners at the end, after it’s done cooking. Thickeners can make it difficult for the liquid to boil and generate the steam required for pressure cooking.

How to thicken a stew with a slurry?

Create a slurry by dissolving equal parts cornstarch and lukewarm water in a small bowl, then add it back to the stew, heating gently and stirring carefully so that you don’t end up with any lumps. 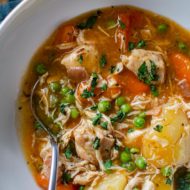