Authentic Greek lamb chops are pan-fried in a cast iron skillet (or grilled) after being marinated in a traditional Greek marinade of olive oil, lemon juice, garlic, oregano and salt. Bring the flavours of Greece home with this easy recipe.

If you’re looking to cook lamb chops, it’s tough to beat the traditional Greek cooking method. Delicious lamb chops hang out in the best, simple marinade (it’s similar to the marinade I use for souvlaki) and are seared in a pan or on a grill.

Lamb chops are expensive, so if you’re looking for a more budget-friendly lamb dish, I would recommend my braised lamb ragu (using lamb shoulder chops).

It’s all about the marinade and the cut of lamb that we’re using. I like to use a small rib chops, known as ‘padakia’. I find the best lamb chops can be found at a Greek butcher. You’ll get meaty chops, often for less than you’ll pay in the grocery store.

And I’ll share a Greek cooking secret with you; always add more lemon and garlic than you typically would. That’s what gives a lot of Greek grilled meats their flavour.

What to serve them with

It’s a no brainer to serve these with a Horiatiki (traditional Greek salad), and you could also serve with homemade tzatziki on the side. 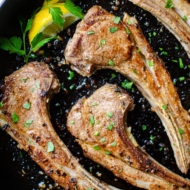