Melitzanosalata is a Greek roasted eggplant dip. It’s simple, and loaded with flavour made by roasting eggplant and blending it with garlic, shallot, lemon juice, vinegar and parsley. This recipe was originally published on July 16, 2012 and updated on June 18, 2020.

Metlizanosalata is a dip that I grew up eating. Now, I didn’t necessarily love it when I was a kid (eggplant is bitter!), but now, it’s something that I really enjoy.

I love sharing my family’s Greek recipes with you, and this one is adapted from my mom’s favourite eggplant dip. I grew up spending my summer’s in Greece and Mediterranean flavours are where I find most of my cooking inspiration.

The key to making this dip is roasting the eggplant for enough time that it becomes soft and loses a bit of the bitterness. My trick to speed up the process is to slice the eggplant in half before roasting.

How to balance the bitterness from the eggplant

In this dip it’s a combination of fat, salt and acid that help to balance the bitterness from the eggplant. Fat in the form of olive oil, and acid in two forms. I use a combination of both red wine vinegar and lemon juice to add brightness and acidity to the dip.

I’ve tried testing it using just one or the other, but I’ve found that the combination is what helps make my mom’s recipe better than others I’ve found online.

I’m using a shallot in this recipe, which is not traditionally used in Greek recipes. My mom’s version calls for a tablespoon or two of chopped yellow onion, but I found a shallot leads to less waste and also adds enough bite to the dip.

If you don’t have shallots available, you could opt to use 1-2 tablespoons of chopped onion. Start with one and taste to see if you need more onion.

Typically, melitzanosalata is served with pita, but I also love to serve it with crackers and crunchy vegetables like celery or carrots.

So this is a very delicious but also very brown dip. I grew up eating it served with chopped tomatoes and parsley on top and a little extra drizzle of olive oil. After all, we eat with our eyes! 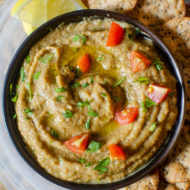