Take a trip to Morocco with this quick recipe for moroccan couscous and chickpea salad that is packed with aromatic spices like cumin and cinnamon. 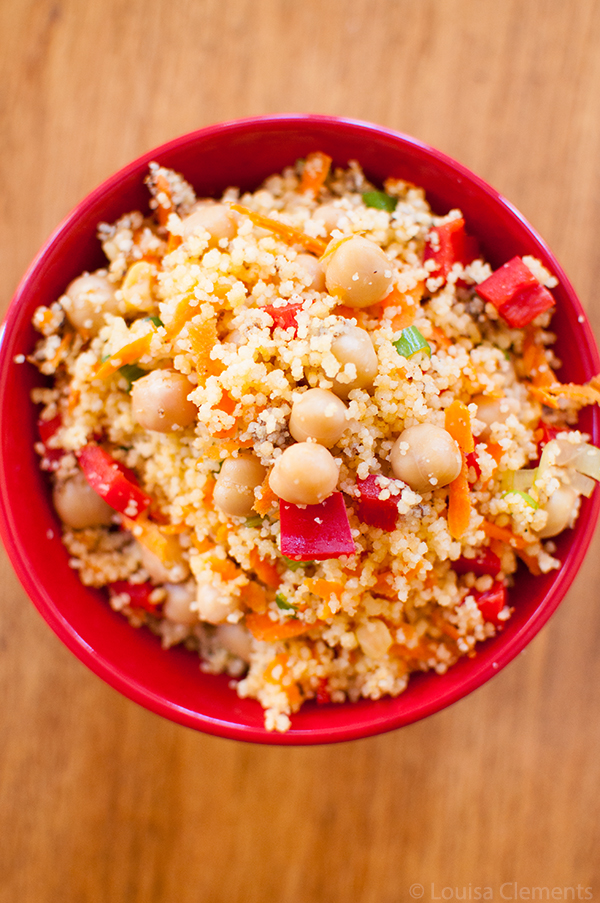 Have you been reading my site for a while, or are you new around here? If you’ve been around these parts before, you’ll remember my love for Moroccan flavours, and if you’re new around here, I think it’s about time you become acquainted with this killer flavour combination. I first dabbled in them all the way back in January 2013 after trying a delicious Moroccan soup at a local restaurant. Ever since, I have been dreaming up different ways to explore these flavours, whether it’s a vegetable soup or a slow cooker chicken stew. Today, I’ve got a killer Moroccan Couscous and Chickpea Salad for you.

So what is Moroccan cuisine? Well, I’ll give you a bit of a cliffs notes version. It includes a wide array of spices, that create a complex flavour profile. These spices are influenced by Mediterranean and Arabic cuisine – which makes sense when you think of where Morocco is located. Couscous is a popular ingredient and their salads or pilafs often include dried fruits (I left out the dried fruit in my recipe because I’m not the biggest fan of dried fruits), but if you’re a fan you could definitely add raisins to this dish. 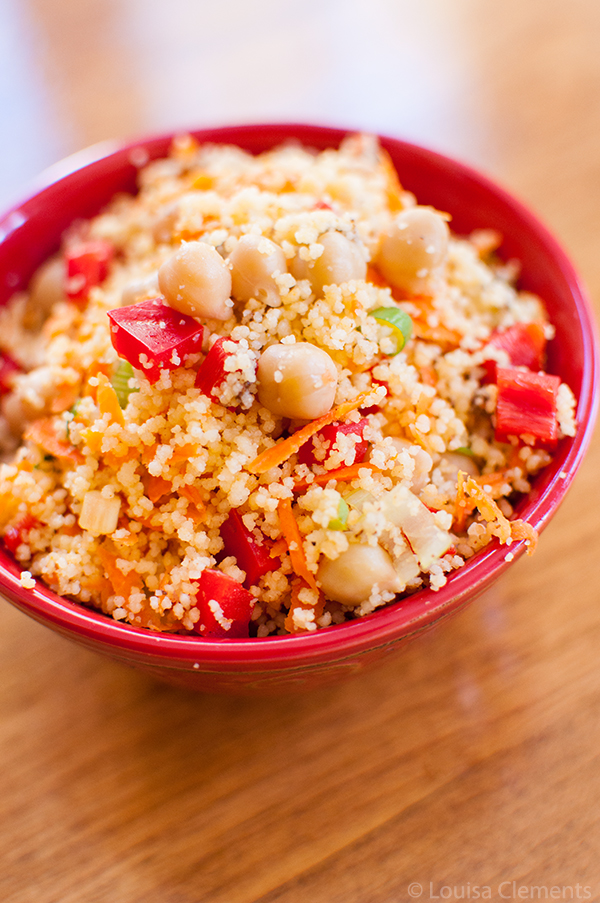 This might sound crazy, but sometimes when I’m writing, I picture you. In my mind, I see you sitting on the other side of the screen. I like to imagine you’re somewhere warm, or at least warmer than Toronto. Or if it is cold like Toronto, at least you’re inside and cozy.

For some reason, you’re always wearing stripes. But I’m thinking that that probably has more to do with my own obsession with stripes than anything else. I hope you’re sipping on a warm mug of tea, hot cocoa or a cup of coffee, depending on what time you’re checking in. Or if it is hot, then an iced coffee would be the best option.

Picturing you kind of makes this blogging thing a little less lonely and writing a little easier. Sometimes it can feel like I’m writing to no one, even though I know you’re there. Like I’m just putting words out into the ether and not really knowing how they are being consumed. That’s why it’s always really nice when I get an email or a Tweet or an Instagram from you. But what it really comes down to, and the reason I come back here time and time again is because I hope that my food gives you something.

A delicious meal, or just some inspiration to get into the kitchen yourself, or maybe my posts make you smile or think. It’s so easy to get distracted by other things in this blogosphere, God knows I have, but what is really the most important thing is you. When push comes to shove, it’s not about the numbers or the social shares or the Instagram followers, it’s about the food.

Every recipe I create is with you in mind. In my poll, you said you wanted more simple dinner recipes, so guess what? For the month of April, I’ll be focused on simple dinners – I hope that you know that you always have a say in the kind of content I post! So if there is something you want to see more of or less of, shoot me a tweet or an email – I love hearing from you.

Quick-cooking couscous is the start of the show, packed with aromatic spices like cumin and and cinnamon. Tossed with chickpeas and fresh vegetables this is the ultimate quick salad. 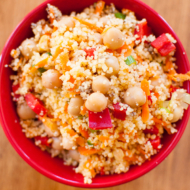 Until next time, here’s a delicious and simple Moroccan couscous and chickpea salad.