Breakfast can be healthy too! A simple, autumn-inspired recipe for Whole Wheat Pumpkin Pancakes, the perfect recipe for a crisp weekend morning. 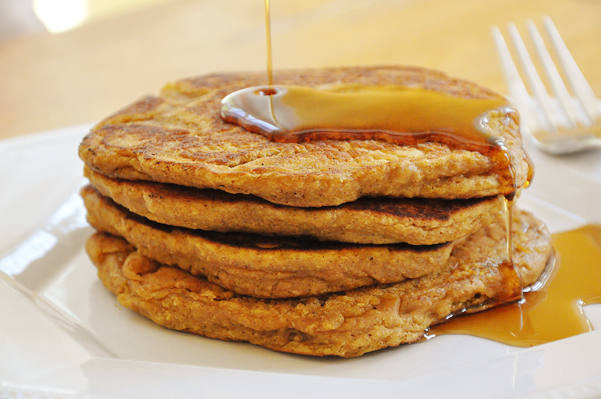 So, it’s time for my first pumpkin recipe of the year: whole wheat pumpkin pancakes. With October just a few days away, I, and many food bloggers seem to have pumpkin on the brain. Speaking of October being a few days away, I’m sorry, where did September go? I feel like it’s just flown by. I’m not sure that I’m 100% ready for everything pumpkin and Halloween yet, are you? Plus with September coming to a close, I now have two posts up on The Kit which has been a ton of fun.

Anyways, I’m finding that recently, I’ve been having hundreds of recipes popping into my head. All day I’m thinking about pumpkin-this and pumpkin-that. Seriously I have at least 10 ideas involving pumpkin floating around my brain, which is a lot for someone who didn’t grow up with everything pumpkin flavoured. I feel like with all of these pumpkin ideas, there isn’t room for much more up there, which may be why my test didn’t go so well the other day…woops. This first year university thing is a bit of an adjustment, I’m so glad to have this space to come back to.

With all of this pumpkin talk, don’t worry if you’re not a huge fan of pumpkin, Living Lou isn’t going to be all pumpkin all the time, only some of the time. And today is one of those days where pumpkin is the secret, or not so secret, ingredient. If you’re looking for some other pumpkin ideas, I’ve got some delicious chocolate-loaded whole wheat muffins and don’t forget about the adorable mini pumpkin donut style muffins.

Last weekend, a good friend of mine was back in town visiting from university and she was coming over for breakfast. Being the pumpkin fanatic that I am, I quickly texted her and asked if she would rather banana pancakes, cinnamon pancakes or pumpkin pancakes. Expecting her to say cinnamon, I was ecstatic when she quickly replied with “PUMPKIN!!!!!”. See, it’s not only food bloggers who are pumpkin crazy. I whipped up a batch of these whole wheat pumpkin pancakes and we were in heaven, seriously, is there anything more comforting than pancakes for breakfast? I grew up with my dad making me his French-Canadian style pancakes, which are thin and almost crepe-like, so I think I have some special nostalgic feelings surrounding pancakes. It’s probably why I’ve shared so many pancake recipes on here.

I opted to make these pancakes whole wheat because of healthier aspect of whole wheat, which is a great idea, especially at breakfast. I’ve also used pre-made pumpkin spice for flavour in this recipe and a little additional cinnamon because it’s my favourite spice and adds a ton of extra flavour to this dish. I also fry them up in butter, because to me it adds a ton of flavour, but you could also use a neutral canola oil if you have that on hand. I wouldn’t recommend using any flavoured oil, such as olive oil, for this dish as it will impart a strange flavour to the pancakes.