Home » dessert » The easiest, homemade cupcakes in the world!

The easiest homemade cupcakes in the world are fluffy and moist with simple vanilla frosting. This recipe was originally published on July 12, 2010. This post contains affiliate links.

Cupcakes are all the rage, and honestly, they are one of those desserts you need to have in your repertoire. This is an incredibly easy vanilla cupcake recipe, so much so that these might just be the easiest homemade cupcakes in the world! Quite a big statement, I know. But if you’re looking to make cupcakes at home, look no further this is the recipe for you.

I’m definitely more of a cook than I am a baker, so when I do bake, I try and keep things relatively simple. Apple crisps and peanut butter oatmeal chocolate cookies are kind of my go-to treats. I hate to admit it, but for years I always relied on cake mixes to make cupcakes–I know, I know. It’s ok. 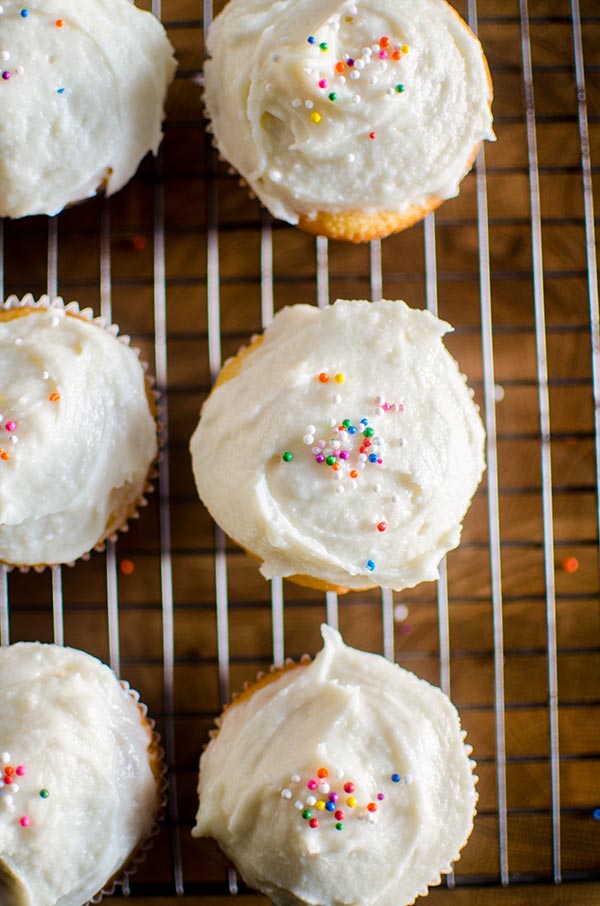 What is the reverse creaming method for making cupcakes?

In the reverse-creaming method, the dry ingredients and the sugar are mixed together first, as opposed to creaming the butter and sugar together. Then the fats and a portion of the liquids are mixed into the dry ingredients followed by the remaining liquids. You could use a standmixer if you have one, but I don’t have enough space in my small kitchen so I like to use this electric handmixer for these.

These are seriously the easiest cupcakes in the world, and if you, like me, are used to using the mixes, seriously try this, you’ll never go back. With a few simple ingredients that you most definitely have in your pantry, whipping up a batch of homemade vanilla cupcakes is a no-brainer.

Baking fluffy, moist cupcakes comes from creating air bubbles in the batter that expand in the oven. Avoid over-mixing (this collapses the bubbles) and over-baking. When you’re making cupcakes, mix on low speeds and stop just as the ingredients blend together.

Vanilla is a fool-proof favourite that are perfect for any party or birthday, but if you’re looking to make another variety of cupcakes, you can also try my easy banana cupcakes which use overripe bananas for a touch of sweetness. 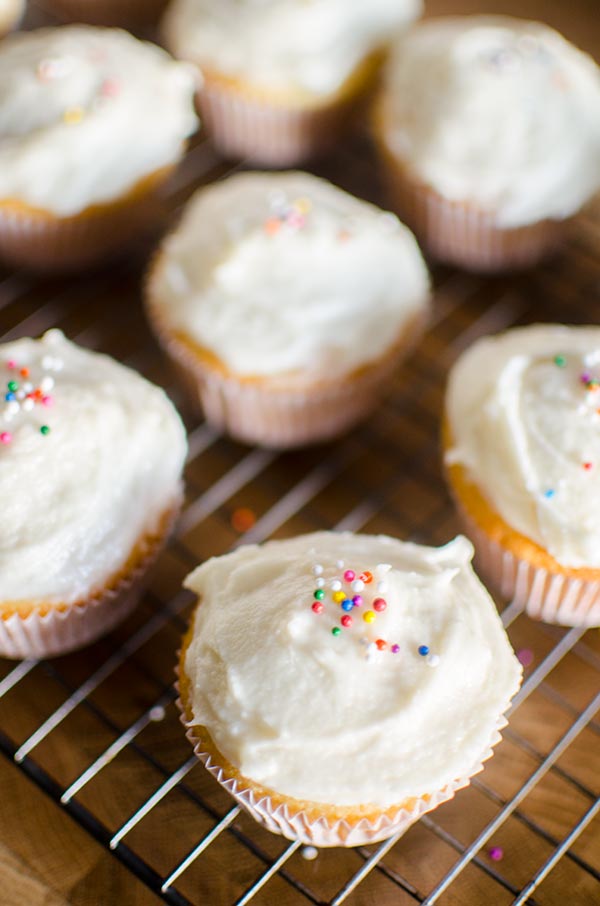 This really is the best cupcake recipe out there because it never fails! I like to make mine with a really simple vanilla buttercream frosting, but you could definitely do a delicious chocolate frosting as well if that’s more your style. 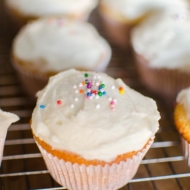 Let me warn you, give these away to friends because it’s very easy to get carried away, and soon enough you’ll be surrounded by cupcake liners and no more homemade cupcakes!