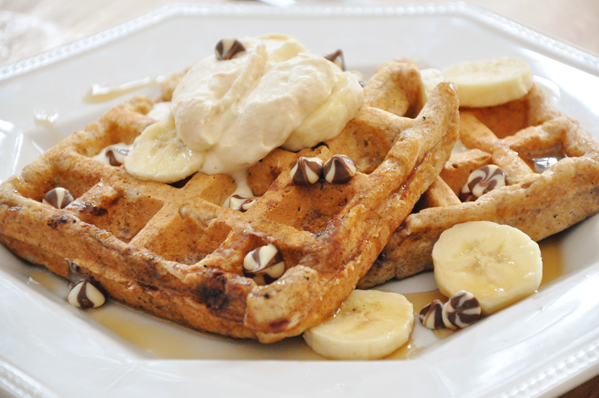 Well, well, well, what do we have here? Are these – gasp – whole wheat, banana, chocolate chip waffles with peanut butter whipped cream? That must be a lucky guess, because that is exactly what they are.

Take it in ladies and gentlemen, I think it’s safe to say that the stars have aligned.

I love waffles, in fact, my waffle maker was the first kitchen appliance that I called my own. My parents gave me my wonderful waffle maker for Christmas when I was twelve or thirteen. It was a wonderful gift; I think I almost cried. That’s slightly embarrassing … I also had a dream about it once, is that embarrassing too?

I blame the waffles, they make me do weird things.

After many years (5 or so…) of making waffles, I finally concocted these bad boys with a certain friend of mine. You may remember her, she’s a good baker, (meringues, or peanut butter cups anyone?) and she has a similar, bizarre passion for waffles. That’s why we’re friends.

Alright, enough chit chat, let’s get to the main event.

Beat egg whites in the bowl of an electric mixer or hand mixer until soft, glossy peaks form.

Mix the wet and dry ingredients together and carefully fold in the egg whites. Slice the banana into slices and then cut those slices in half. This creates “banana pockets” when you bite into the waffles. Mix in the banana and chocolate chips to the batter.

Using a ladle, ladle the batter into the waffle iron and cook until desired doneness, about 4 minutes for golden waffles.

In the bowl of a stand mixer or hand mixer beat the whipping cream and peanut butter until thick and the correct consistency. The amount of time depends on the speed of the mixer and the amount of cream used. Be careful not to over beat the cream as it will curdle and turn into butter.

At the last stages of whipping the cream, add in the sugar and combine on low for a second or two.

Serve the peanut butter whipped cream on top of the waffles with some banana slices, chocolate chips and maple syrup!